Between 1949 and 1989 over 800,000 people were forced to leave Ireland. By 1956 the population had fallen to 2.8 million the lowest ever recorded. The rural communities were decimated by the impact of emigration and those who stayed had to suffer hardship, isolation and were very dependent on money and clothes that were sent home by siblings or relatives living abroad. Many of those who stayed in this decade did so in silence as they watched family members and friend's leave. Now in a new millennium these people have passed on and their homes stand as a monument to a bygone age. Title of ownership has now passed to far-flung relatives, and these houses presently lie deserted awaiting the return of owners whose dreams of coming home may never be realised.

"One of the most significant collections of photography in contemporary Ireland and will be amongst the most important works of Irish art in years to come".
Kieran Keohane, head lecturer of Sociology at the University of Ireland, describing Creedon’s work. 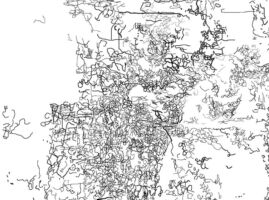