Andreas’ practice is focused on ideas of conviviality and participation through the creation of structures and installations referencing utopian ideals and collective environments.

Andreas has both a collaborative and individual practice. His most recent work looks at cooperation and the negotiations inherent in support systems. This work is driven by the questions; what does it mean to offer support? How can we know that what we are offering is beneficial? And, is support something we give because we care or because we seek integration?

In this exhibition Andreas will present new work which focuses on a series of support structures that highlight the negotiations inherent in the act of giving and receiving support. Using materials often overlooked in our architectural environment, he makes visible the infrastructure that supports our everyday lives. With this new work he is urging us to consider what is being supported.

Andreas Kindler von Knobloch gives good hugs. I have always thought of the dynamic of the hug as similar to that of the handshake. There’s either a powerplay, or there isn’t. And with Andreas, there isn’t. What exists instead is a recognition of the other person – not the other/otherness in opposition but a connection to otherness, a meeting point, on equal footing. Where a handshake might signify a politics of formality, a hug signifies a politics of friendship. The powerplay is replaced by a question of trust. It’s about intimacy.

Intimacy, relationships, interdependencies, all bound up with momentum – Andreas’s work, however static it may appear, is always live. It is always enacting the push and the pull. Force against force. Skin on skin. Materials, forms and/or individuals support one another, even when they work against one another. An overturned car by a group of friends becomes a will for utopia, a radical energy that is at once destructive and constructive (Luminous Flux, 2012). Textures become highly defined through their touch of another, be they material – rough steel and poured concrete clasp dense cut foam (In Support, 2016); or social/environmental – the American dream slides up against Geology (Sisyphus Americana (.n), 2013). There is always a point of pressure in these works that raises the tension. Like warm, bare arms meeting ice cold air, the goosebumps rise.

Such performed mutuality and heightened materiality are never enacted in isolation in Andreas’s work. Structures are built in relation to their environment. As a set of tools, rather than being site-specific, the structures are adjustable and interchangeable. The works that feature within the exhibition In Support, at Mermaid Arts Centre, exist because of how they are installed, how they fit and sit up against the wall, butt off the floor or are strung out across the ceiling. You take away the existing gallery supports and the works will collapse. Or – on the flipside – you take away the works and the gallery walls falter? Maybe, possibly (Andreas understands the innards of these particular gallery walls – years ago, he built some of them).

When I first came across Andreas’s work, I wasn’t actually aware it was his at all. A project, a kind of social experiment, it was the co-founding of Exchange Dublin in the heart of Temple Bar, back in 2009 (with Dylan Haskins and Jonah King). The fruits of a youthful ideal –This is a space for new ideas. This is a space for connections. This is a space for action. – it was a not for profit, all-ages arts centre. Founded on collectivist principles, it was intended as a reaction to a perceived culture of commercialism and individualism prevalent in Dublin. The fact that I wasn’t even aware of Andreas’s input is key to the collectivism that was at play and the artist’s position within that.

This is a vital position that he has taken and continues to take throughout his practice. In MAKING SPACE, 2014-2015 (with Laura O’Quin) there are two tables for a performance, a book that can become a wall, a bench for watching a video. No single object takes precedence over another, just as no single person takes precedence over another. The project, Bravo Seratonin, 2012, initiated by Carl Giffney/The Good Hatchery, sees a narrow, six-meter long canoe dug out by teams of four to nine people, eventually voyaging down the Grand Canal to the Dublin Basin in 2015. As is typical of Andreas Kindler von Knobloch’s work, for the viewer it becomes difficult to distinguish where his vision begins and where his collaborators’ ends (surely the sign of an adept collaborator).

However – and this is where the story shifts – his most recent body of work, In Support, has the air of an artist beginning to step out from the crowd of the collective. A long-time collaborative artist, it is as though he has transformed his co-makers of the past – and there have been many more than I’ve mentioned here – into his material configurations, put into dialogue with the architecture of the gallery. It’s a confident step. But for me, it also raises a paradox – when you wish to speak of support and collectivity, why the need to do so from the individual perspective, from an authored autonomy? Why not continue to embody the ideology in all that you co-produce, as you’ve done so to date? Is it not conflicting to move from a dissolution of self to a newly solidified identity? To become the master of materials and environment?

The earlier question of paradox is a deliberate conjuring by the artist. It is a strategy for examining ‘giver’ and ‘receiver’, and all that lies between. Andreas wants us to take notice of, and to make the infrastructure visible before any collapse has to occur. In In Support, he takes away that which may be supported. What he leaves us with are these ambiguous support structures that appear to be temporarily helping out the space, or somehow creating a space in which helping may happen. Like an easy friendship, they fit in well with the building, all sympathetic tones and familiar gestures. So much so that their essential supportiveness, in and of itself, seems to justify their presence however ambiguous. Support takes centre-stage. Care takes centre-stage. In an earlier work, Ignis Interno, 2011, the artist created a light so bright and hot that it was impossible to look at it head-on. Can this spirit of care and generosity, now isolated and exposed in In Support, burn in the face of spectacle and ego?

Andreas is an artist who practices what he preaches. His inherent understanding of craft and design has been recently polished having just emerged from a two-year Masters on America’s west coast . This polish follows on from several years of professional experience as a freelancing art technician and artist assistant in Dublin. Andreas’s outer research and references – such as the work of Céline Conderelli, Robert Morris, Gavin Wade, Chadwick Rentanin, Sol le Witt – are quantified by his instinct for handling materials as well as his sensitivity to the workings of complex inter-relations. His new found confidence is well-earned. And the exhibition In Support is the first outing of this body of work in Ireland. Lucky us.

Incidentally, Niamh O’Donnell, current Artistic Director of Mermaid Arts Centre, was instrumental in the founding of Exchange Dublin when it first began, then in her role as General Manager of Project Arts Centre, Dublin.
Artist’s website, http://www.andreaskvk.com/index.php?/projects/exchange-dublin/. Accessed 12th July 2016.
Masters in Applied Craft and Design, at Pacific Northwest College of Art – Oregon College of Art and Craft, USA. 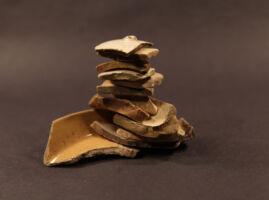 Towards A Dialogue of The Possible 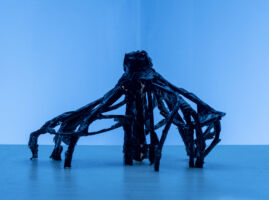 Púca in the Machine 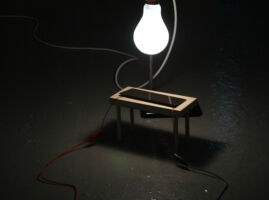 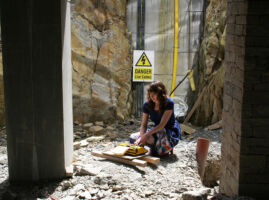 The Making Of: Memories Made Manifest