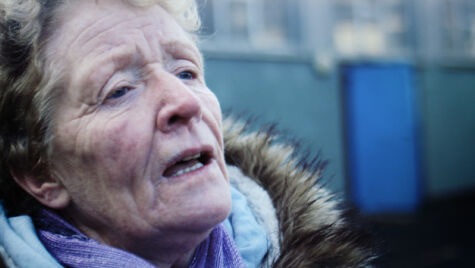 Shaun Dunne of Talking Shop Ensemble made a film / drama piece with older people with financial support from Mermaid and Bealtaine. Everybody Sings was a candid and poignant examination of the relationship between intimacy and ageing and was developed in collaboration with a group of older citizens whose stories and experiences are presented through music, film and live performance. Shaun worked in Mermaid on the finalising of the film, sound and the theatrical elements and then presented the work in Smock Alley as part of Bealtaine Festival on 15th and 16th May 2018.

Everybody Sings is led by artist, Shaun Dunne, in close collaboration with film designer, Luca Truffarelli.

This new work seeks to explore changing attitudes towards age, sex and sexuality by fusing testimony, film and live performance. Questions on consent and capacity, bereavement and break-ups will be mindfully explored and demystified through the stylized abstraction of lived experience and inspired narrative.

Mermaid supported this production with financial support towards its creation and by supplying a free rehearsal space.