A text by Wicklow native James Merrigan has been commissioned which reflects on the installed work of Shouty Snow Echo, Laura Kelly's exhibition running from March 21st - April 30th 2022. A printed copy of this is available as a free gallery handout and can be viewed here.

The word ‘environment’ is something that shouts loudest in Laura Kelly’s exhibition, entitled, funnily enough, SHOUTY SNOW ECHO. First there is the environment intimated by “Snow” in the title. Then there is the whiteness of the exhibition as a whole, mapped by a hazardous orange-red line in tape, paint and frame that demarcates and hyperlinks the scrunched-up paper landscapes that blossom on the wall. The image of the frustrated writer, typing away on an analogue typewriter, amidst a floor littered with paper snowballs that have missed the writer’s tone and the waste basket target, is the metaphor that comes to mind. But that’s my stuff! Kelly’s stuff is another question.

And yet that is exactly what this exhibition does: it poses questions literally and figuratively from different perspectives. It is not an exhibition of objects separated tastefully by white walls and numbered 1 through 10, and curated in that order. Nor is it an exhibition where one can anchor oneself in the gallery with a consistent horizon of framed art objects, so one can lose oneself in the one-to-one oneness of individual viewer meets individual art object. No. This is an exhibition that tilts our perspective and physical and mental bearing in the gallery.

Continuing with our frustrated writer metaphor, let’s imagine Kelly unscrunching her waste basket drawings and mapping them out onto the walls of the gallery. There is something sad about a scrunched-up piece of paper, and something sadder about an unscrunched one: rescue and regret etched into the folds. From the vantage point of the bare boards of the gallery floor, these paper dioramas visually suggest a landscape far from the townland and gallery that now frames them. We imagine a frame — we need to imagine a frame — to contain the expanse. A border will do, any border. Something to capture or square off our wandering and controlling gaze. We take out our phone. We notice with relief and surprise how good Kelly’s work looks captured in the frame of our phone. We post it on Instagram. It looks good. Other people think so too. It’s easy. We move on.

No such luck here in the gallery, where the artist’s recycled rubbish pile circumvents the controlling gaze. Kelly’s kingdom of pencil, paper and plastic is a democracy, one that levels the playing field. This tide of paper and plastic ebbs this way and flows that way, away from a centrifugal or hierarchical (or patriarchal) locus. We are left forlorn, like the paper snowballs that missed their target, miserably.

If you are open to it, thoughts can explode outward here, like the seconds following the Big Bang, when we were left with forever unanswered questions as to when and where beginnings and endings start or end. I ended up up thinking about the environmental crisis, which anticipates a warming up not cooling down of the Earth. Kelly’s white, grey and hazard tones extrude an idealised and romanticised environment, once, twice, a million times or years removed from burning civilisation. Further, in the sheltered environment at the back end of the gallery, where a series of short animated vignettes express distance and zoom in the push, pull and layering of drawings, it is the presence of animals — a far-off fox and up-close polar bear in a maelstrom of mark making — that destroy any sense of secure footing in time or place. We are lost. Adrift.

The lack of centre expressed here in the gallery is something that the Romantics expressed earlier in the philosophy and painting of the nineteenth century. Caspar David Friedrich famously painted a man (“Wanderer”) standing on a rocky precipice with his back to the viewer, looking out and “above the Sea of Fog”. Commentators have described the Romantic landscape tradition as one where “the landscape became the protagonist rather than the human/s within it”. The call of the wild always shouts loudest in the face of cruel civilisation.

Within Kelly’s wandering landscape the same sense of human de-centering and displacement is at play. Especially with regard to the type of landscape being expressed, one of snow and Winter, influenced by the Winter residences the artist undertook in Canada and America. But here, in the now, we are back in Ireland, in a gallery that looks out on a townland surrounded by a vista of sea and mountains. The name “Sugar Loaf” is immediately invoked while enveloped by all this white and the percolating coffee and chat downstairs in the cafe. The main gallery produces a collision between art and life, what the minimalist artist Fred Sandback idealised as a “pedestrian space”. In the midst of this convergence of art and life I found myself standing dead centre in the gallery, being pushed back in an effort to take in everything in one panoramic view. A controlled view. I had to make a conscious decision to push up close… closer. Only then did details start to reveal themselves, such as the hinges, screws, twine and D-rings that tether all the elements together, as if a paper parachute had just fallen from the sky to lay on the gallery wall — or is it the ground? — before me.

Kelly’s exhibition provokes what French philosophers Gilles Deluze and Félix Guattari called “rhizomatic” thinking, a non-hierarchical linking between things and their associations, like Sigmund Freud’s clinical “free association” or Jack Kerouac’s On the Road “stream of consciousness”. Kelly spread-eagles her panoply of materials in a delta of lines and delineations that come together to form a waste-basket aesthetic. In the face of this dispersive and scattershot display of drawings without a beginning, end or source, we are left lost in the white wilderness of Kelly’s giant map without landmarks or letters.

If we think of humans as having an evolutionary zeal in how they try to control the landscape in which they find themselves, especially a harsh or alien one that threatens their survival or psychological locus (the contemporary art gallery being included in such ambivalent and harsh landscapes), then Laura Kelly’s undulating landscape of snow and lines that range across it, suggest something that reaches beyond the practice of object-making, to one that is about experience and its impossible transcription and reduction to one contemplative object. An experience where one loses oneself in the environment in the hunt for objects or tethers that will promise them satisfaction, security and, above all, control. But no such security or control is in reach here, either for the eye or for meaning. 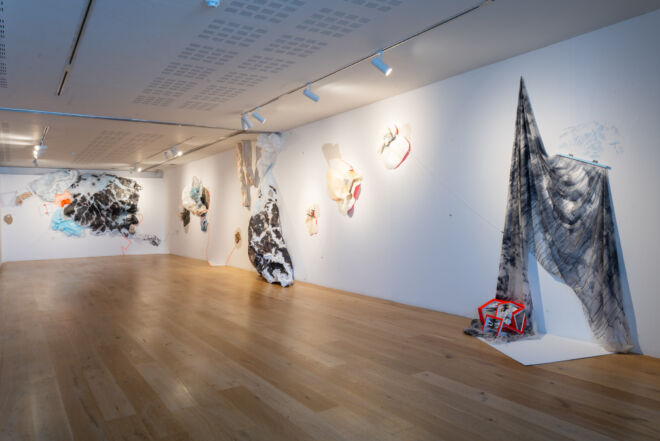 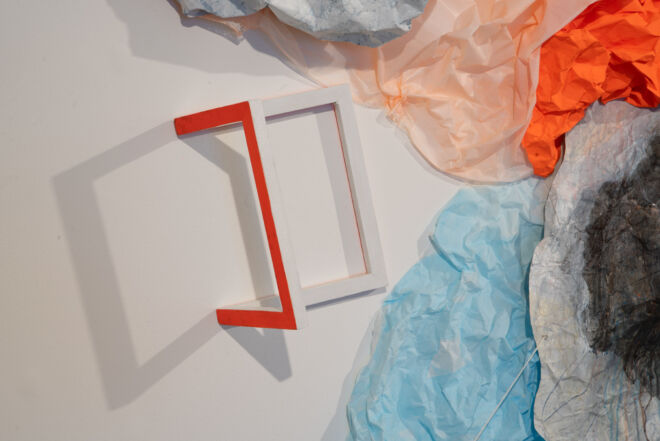 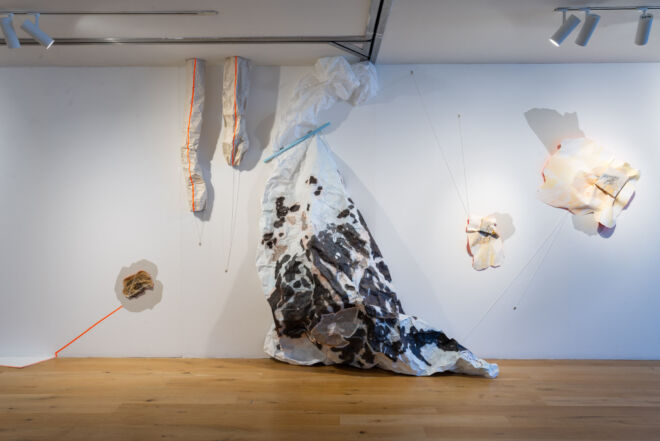 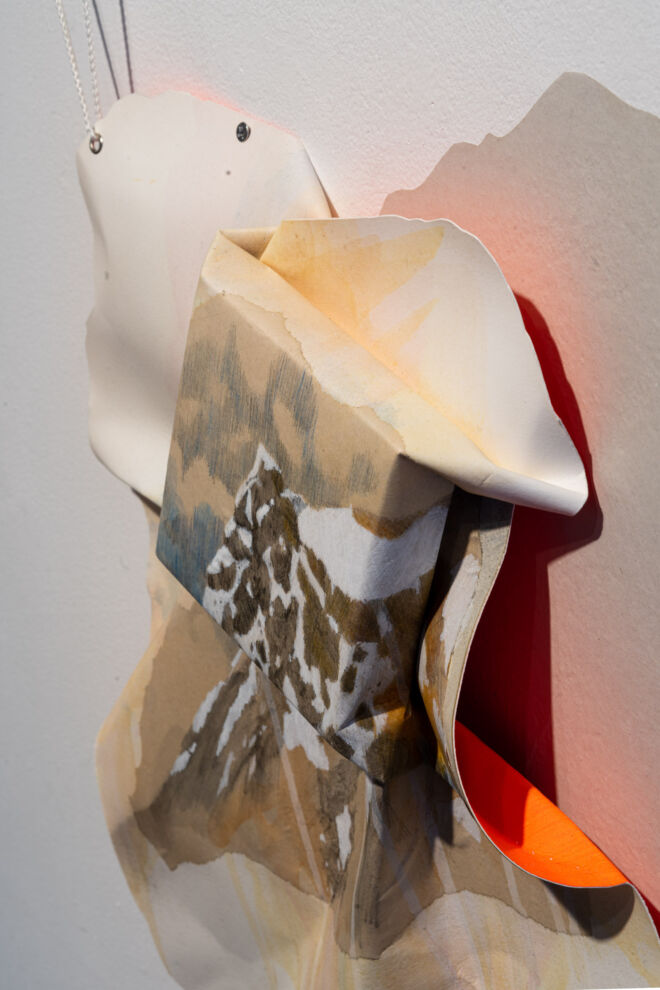