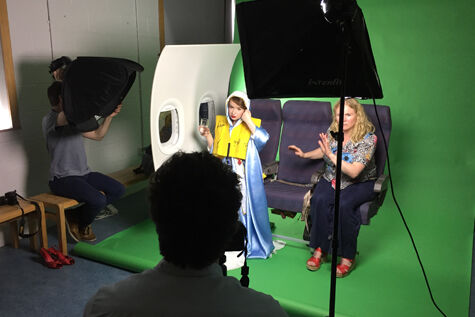 Janet is a wonderful (and well known) artist. In 2017, Janet was given a Gap Day Bursary (an artist’s support initiative led by Lian Bell and supported by Mermaid). Following this, Mermaid developed with her, a new work A Holy Show, (she also got support from The Pavilion Theatre). The work was produced by Mermaid and presented with Janet as a first-time Writer / Director with a talented cast: Caitriona Ennis and Patrick Moy. The show was presented in Mermaid in September 2018 and moved directly into The Abbey Theatre (on the Peacock stage) as part of Dublin Fringe Festival for eight sold out performances. Mermaid then handed over the producing reins to independent producer Donal Sheils, Verdant Productions and A Holy Show went to the Edinburgh Fringe Festival 2019 where it played 26 performances in The Pleasance Theatre with four-star reviews in The List, the Edinburgh Reporter, The Upcoming and the Arts Review. A Holy Show in 2020 with two new cast members, Roseanna Purcell and Mark Fitzgerald, will head out on a 14-venue nationwide tour and we’re delighted to have it return to Mermaid on 5th February. This is an exciting chance for Wicklow audiences to see this highly entertaining piece which was made in Mermaid – don’t miss it!

In 2020, Mermaid will again work and support Janet with a new piece called QUAKE, also supported by The Pavilion Theatre. Janet wants to explore the lives of seven characters over a year as they struggle with their experiences in a modern Dublin and with their own ability to understand and articulate these experiences. Each act will follow the form of a Quaker meeting, starting in silence. Each of the “silent” sections will use music, dance and physical comedy to progress the story. There will be a showing of this work in development as part of Dublin Theatre Festival 2020 – details to be released soon.

Theatre truly is a collaborative art form because not only are the artists imperative to the success of the piece we also could not make these works without the support of; an Arts Council of Ireland Theatre Project Award and Touring Award. Script and Play Development co-commissioned by Mermaid Arts Centre and The Pavilion Theatre and supported by the Centre Culturel Irlandais (Paris) and Fishamble: New Play Clinic and Culture Ireland - no less!

‘Airplane meets Hall’s Pictorial Weekly …Moy and Ennis delivering deeply enjoyable and impeccable performances… have you cracking a rib with laughter…. Only in Ireland could you get a hijacking this ridiculous. Or this hilarious. Or this much fun.’