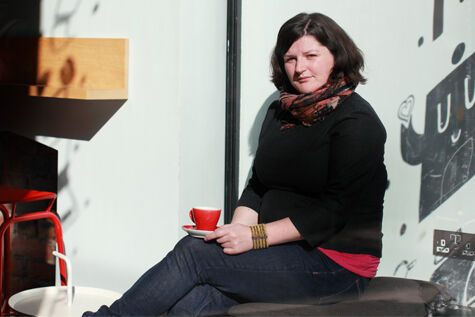 Kate Heffernan and Mermaid are working in partnership with Project Arts Centre on a new work. GUEST HOST STRANGER GHOST is about three 30-somethings who temporarily rent a house owned by an elderly woman now living her last months in a nursing home. The house is in limbo, abandoned in a sudden health crisis, never again to be occupied by its owner, but held until her death as dictated by the State, rented out by her children, to be sold posthumously as a condition of the Nursing Home Support Fair Deal Scheme. The lives of its three current occupants go on, surrounded by the stuff of this woman’s entire life.

A story about people living in someone else’s home, is conceived as a play for the stages of other people’s plays, designed to be performed pre-show on the sets of other people's productions – in a form that reflects the transience and heightens the time limit of its characters’ living situation.

In this development period, Kate and her collaborating artists will be exploring the limits and possibilities of an experimental light-on-its-feet performance that can happen on wildly different stage designs, exploring the intricacies and prospects of being let in by the kindness of a host production. In a marriage of form and content, our ‘guest’ performance has been let in by its ‘host’, but we can't really touch anything, we'll have to leave it as we found it, and we must be out as soon as we’re told. What begins in working light must end in the pre-show bulb check, sound level test and LX cue-to-cue by the host operator as they prepare for their own performance, and the trajectory and movement is marked and defined by these definites.

Our hosts for this development and showing are the incredible local theatre group Square One. This piece would not be possible without their openness, kindness and professionalism of their Director, designers and all of their actors and participants. Do come to the showing of GUEST HOST STRANGER GHOST at 6.00pm on Friday 8th November, and quite frankly I strongly encourage you so stay and see the wonderous production of RUMOURS BY NEIL SIMON by Square One, as they never disappoint!