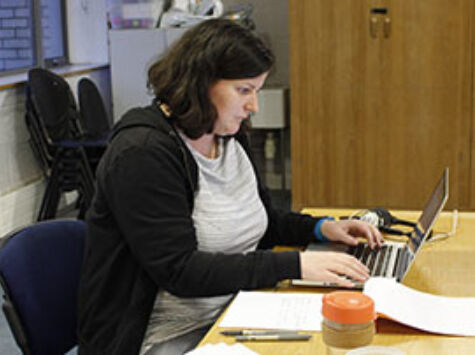 Writer Kate Heffernan has been working in Mermaid on a part-time basis over the past year, financed by the Arts Council’s Next Generation Bursary, which supports artists at an early stage of their career. Kate has worked on three new pieces of writing. In January of this year Kate worked here over 2 weeks to develop their new piece for young people, PEAT (this piece also has had support from The Ark, A Cultural Centre for Children, Dublin). On a peatland plain on the edge of an island, a boy and girl meet to bury a cat in its preserving earth. As they sit and dig the boggy grave, they play a game of Would You Rather? and what follows is a conversation about life, fate, extinction, migration, mortality. A slant on Hamlet’s gravediggers for young audiences, Peat is a metaphysical conversation rooted in the world and perspective of two 12 year olds.