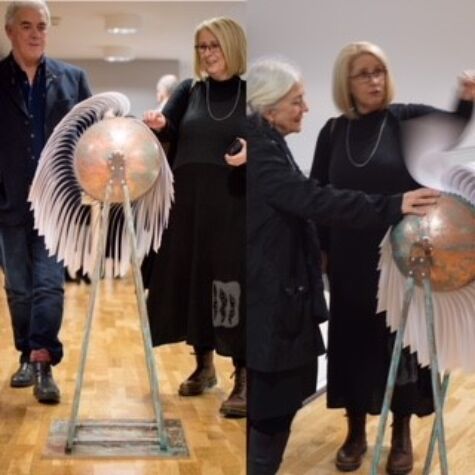 Disability Ireland and was awarded an Arts and Disability Connect Award (funded by The Arts Council). This scheme offers artists the opportunity to connect with other practitioners or venues to make a change in their practice in terms of scope and scale by engaging in mentoring or training. Mermaid supported Nickie as she began to expand her practice to incorporate working collaboratively with people who have invisible disabilities through the Dyslexia Association of Ireland. Reflecting on personal experiences of pain, abuse, bereavement and a lifelong struggle with literacy, Nickie has always recognised the role painting has played in expressing her emotions. However, for the past year she has taken part in a programme for Adult Dyslexics, and found the intense experience of working through language particularly cathartic. Nickie brought together paintings, sculptures and written word as well as participatory elements in the making of a new body of work. In this work Nickie explored the everyday difficulties and historic traumas experienced by people who have been affected by dyslexia and the trauma caused by abuses of power. The exhibition Settling the Past was a huge success and ran in The Lab, Dublin from 20th January to 4th March, 2018.

Mermaid supported Nickie with development, financial and planning along with mentoring support.